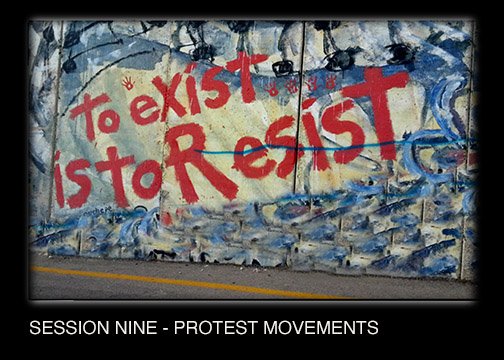 Research Assignment Conversation: Each participant will present their findings regarding water allocations inside Israel proper, the West Bank and Gaza. based on their assignment research.  It will be especially enlightening to analyze the sources utilized in this discovery effort.

Discussion Topic: The discussion will focus on protest movements both inside Israel/Palestine and internationally that are focused on raising the issues of the conflict, coupled with the tactics that are being used. The discussion will highlight the Gaza Freedom Flotillas whose goal has been to break the naval blockade of Gaza through nonviolent direct action as well as the Great March of Return, the on-going nonviolent protests inside Gaza.

The international Boycott, Divestiture and Sanction Movement (BDS) will be defined, as will the key similarities and differences between the recent Black Lives Matter protests and those surrounding Israel/Palestine.  Additionally, the discussion will examine Israeli campaigns internationally, looking at issues promoted as well as an analysis of their strategic efforts to discredit pro-Palestinian protest movements, especially those surrounding the BDS campaigns.

Research Assignment: Ascertain organizations, institutions and groups who are supporting Palestinian issues and groups and organizations supporting Israeli issues. In an essay compare and contrast their ideology, their missions, their phrasing, and their tactics.  From your research include your analysis as to strengths and weaknesses of each.